Union activity began in the department store industry in New York City in the early 1930s spurred by the formation of the CIO. 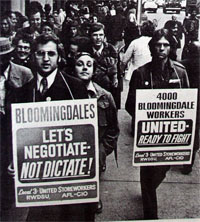 The country was just beginning to come out of the depression. Under the “New Deal” of President Franklin Delano Roosevelt, the National Labor Relations Act of 1935 was passed, giving workers the right to form a union.

At the Bloomingdale’s department store on 59th Street, employees had to work for 45 hours per week, six days a week. They were rarely compensated for overtime, and the wage itself was low. Unions for retail workers were unheard of. However, a small but brave group of men and women recognized the need to organize.

This small secret organizing committee was accused of being “radicals” and “Communists” by opportunistic executives, protection department personnel and company stooges trying to break the back of the union organization in the store.

Despite all obstacles, the drive went ahead and workers continued to sign application cards. The growing unit was chartered as Local 3 in 1937.

The organizing drive continued and picked up steam. Union meetings were held in workers’ apartments, in neighborhood restaurants, even in Central Park. By early 1938, a vast majority of warehouse workers had been signed up and were meeting in a neighborhood bar and grill aptly named The New Deal. Some workers began to pay voluntary dues of 50 cents per month to help defray expenses of the fledgling organization.

In October 1938 another card count was held and this time the NLRB certified Local 3 as the bargaining representative of Bloomingdale’s workers. The company agreed to start negotiations right away. A large negotiating committee of workers, along with the RWDSU’s International President and attorney, represented the union.

On November 3, 1938, the first Local 3 contract was initiated, subject to member ratification. Shortly after, a general membership meeting was held, in which an overwhelming majority of workers ratified the contract.

The union’s officers and an executive board were elected in March 1939, and a local constitution was drawn up and approved.

Since its founding, Local 3 has won many gains for Bloomingdale’s workers. In 2008, Local 3 secured a four-year contract that included a general wage increase in each year of the contract for all hourly paid employees, improved earnings opportunities for straight commission sales, protection of our health care program, and job security. Local 3 also worked to improve the strengthening and growth of our union, guaranteed respect and dignity on the job. Within a few months, Local also extended union protection to the Bloomingdale’s workers in the SoHo store.